Building a strong core has and will be one of the main focuses of the fitness community from competitive athletes to the regular joe trying to get a 6 pack for beach season. But what is the "core"? If you were to ask most people in the gym what the core is made up of, they would probably say the "6 pack muscles" or some might even add in the obliques. In fact, the core is much more. The scientific definition of the core is the "lumbopelvic-hip complex" or the area containing the diaphragm, abdominals and obliques, paraspinal and gluteal muscles, and pelvic floor and hip girdle (Bliven et al.) which is a much larger area than most people would think. So how do we train this large area of musculature that is key to performance and movement in both sport and life?

In the fitness community there are generally two different types of core training: stability and general strength. Both types have their respective benefits while neither has much downside other than performing exercises poorly and possibly increasing the risk of injury. Core stability training is typically associated more with sports performance and geriatric physical therapy while core strength training is more commonly associated with the general public and training the "6 pack muscles". Core stability training often trains individuals through ranges of motion specific to what they will encounter in sport or movement in life but may not give the muscular definition like general core strength training can. It is also believed that core stability can lead to a reduction in the risk of injury but there is little evidence that supports this belief (Bliven et al). Core strength training can give the individual a good base of strength to work with but may not work in specific ranges of motion related to movement. That being said, both are important to general fitness and movement and have some overlap. Ex. If your core is stable it must be strong; if your core is strong it must be stable.

Where and When to Use Them

The answer to this varies depending on who you talk to and the situation that you or the person you're training are in but the short answer is they should both be used somewhere in a training program. Chances are that most people's core area, especially those that do not routinely train, has weakness and could be improved. Core training can be done many different combinations of ways from training only stability on certain days and core strength on other days to a combination of both every time you train. How often and where the core exercises are placed in the program are highly debated in the fitness community and is dependent on personal preference and opinion. Generally, a good plan is to train a combination of core stability and strength 3-5 times per week as part of the warmup before a strength training session. It can help to activate and, overtime, provide a base of strength and stability to muscles used in multi joint lifts that are typically done in the beginning of training sessions: squat, deadlift, clean, snatch, etc.

The plank is a very versatile exercise and there are many different ways to progress it if you can get creative. For example, you can alternate lifting one leg at a time off of the ground or throw a yoga ball in under the elbows. 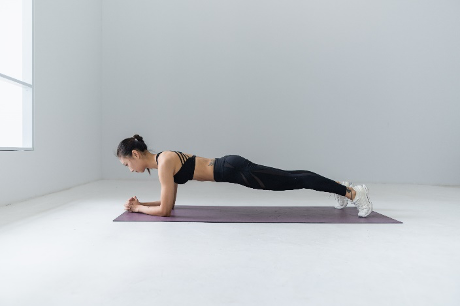 The pallof press is an example of an anti-rotation core stability exercise. Anti-rotation is exactly what it sounds like, the obliques and rectus abdominus are fighting the rotation that the resistance band is putting on the torso. This can be progressed by performing single handed, a static hold with arms extended, in a half kneeling stance, or adding a weight to the band and having a partner bounce the weight around a little. Make sure you work both sides when performing this exercise. 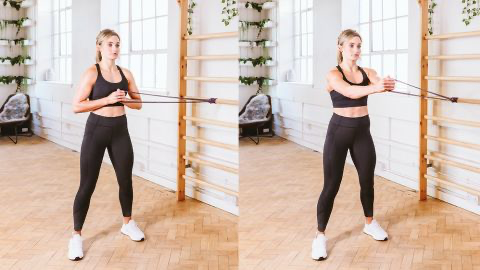 The bird dog challenges your core to stabilize while only having two points of contact on the ground. Ways to progress this exercise include elevating the foot of the knee that is on the ground or advancing into a high plank and lifting the opposite hand and foot into the air. 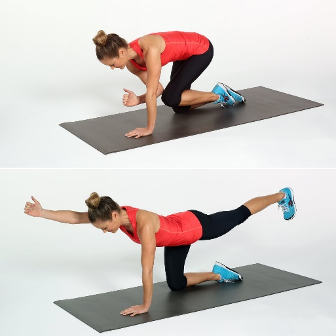 Again, there are many different ways to work on core strength but here are three examples of core strength exercises which can also be progressed and regressed as you see fit.

Lift your legs straight into the air while trying to reduce body swing and isolate the abdominal muscles. This can be regressed to a reverse crunch on the ground or a hanging knee tuck. Progressions of this exercise may include adding a weight or resistance band to your legs. 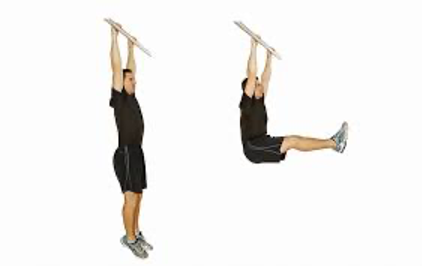 This is the most basic of all core exercises. This picture demonstrates what some call the butterfly sit-up. Performing a sit-up with your legs in the butterfly position may recruit your abdominal muscles more and reduce the use of the hip flexors. Just like the plank in core stability, there are many different ways this exercise can progress. A weight can be added to either the chest or overhead or another progression would be the cable crunch. 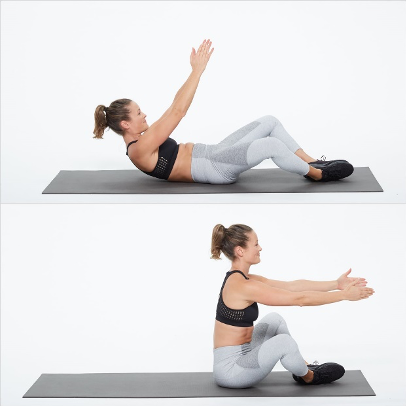 The Russian twist is thought to activate more of the transverse abdominals and oblique muscles of the core. To progress this exercise, you can add a weight or medicine ball. 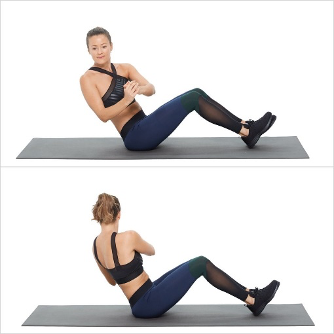 Even though we all know that a strong and stable core is key to performing in sport and life there is little evidence showing that an unstable core can result in a higher risk of musculoskeletal injury (Bliven et al). However, there are many studies that have found relationships between core activation and stability through movement such as spine stabilization, alterations in lower back pain, and movements of the extremity to name a few. As far reaching as the core and all it encompasses is it is not surprising that a deficiency of strength of stability in this region can influence many other parts of the body.

If you are interested in training with the team at Kinetic Sports Performance or would like to learn more visit www.kinetic-sportsperformance.com or contact Lukas Smith by email: lukes@kineticptpa.com or by phone at: 641-891-5304.